In Seeding Waves, I suggested that fully seeding a tournament might sometimes result in an incentive for players to seek lower seeds rather than higher ones. Such cases are probably rare, but they’re certainly possible. And with the right payout schedule, the effect can be dramatic.

Here’s a chart plotting ln(expectation) against seeding position for a 128-player tourney in which all players winning at least three rounds share the same payout, while those who do not win three rounds get nothing: 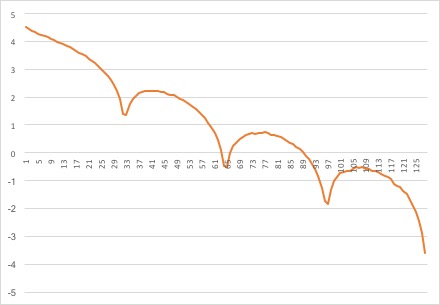 The overall trend of the curve is down, suggesting that on generally would prefer a higher seed to a lower one. But seeding positions near 32 and its multiples are at a serious disadvantage because they’re likely to have to play high-seeded players in the early rounds.

This may seem a very peculiar payout schedule, but it’s not unthinkable. It is, for example, one way to think of the qualification rounds for the U.S. Open tennis tourney, in which 128 hopefuls play for 16 qualifying entries into the main singles draws, each being required to win an eight-player mini-bracket in three rounds. There is a little money and a few ATP points for unsuccessful qualifiers, but if you think of qualification itself as the reward for entering the qualifiers, this would be the payout curve if the qualification rounds were fully (and perfectly) seeded.

But they’re not. Tennis uses a tiered seeding approach that prevents such waves from forming. I’ll explore this in the next post.